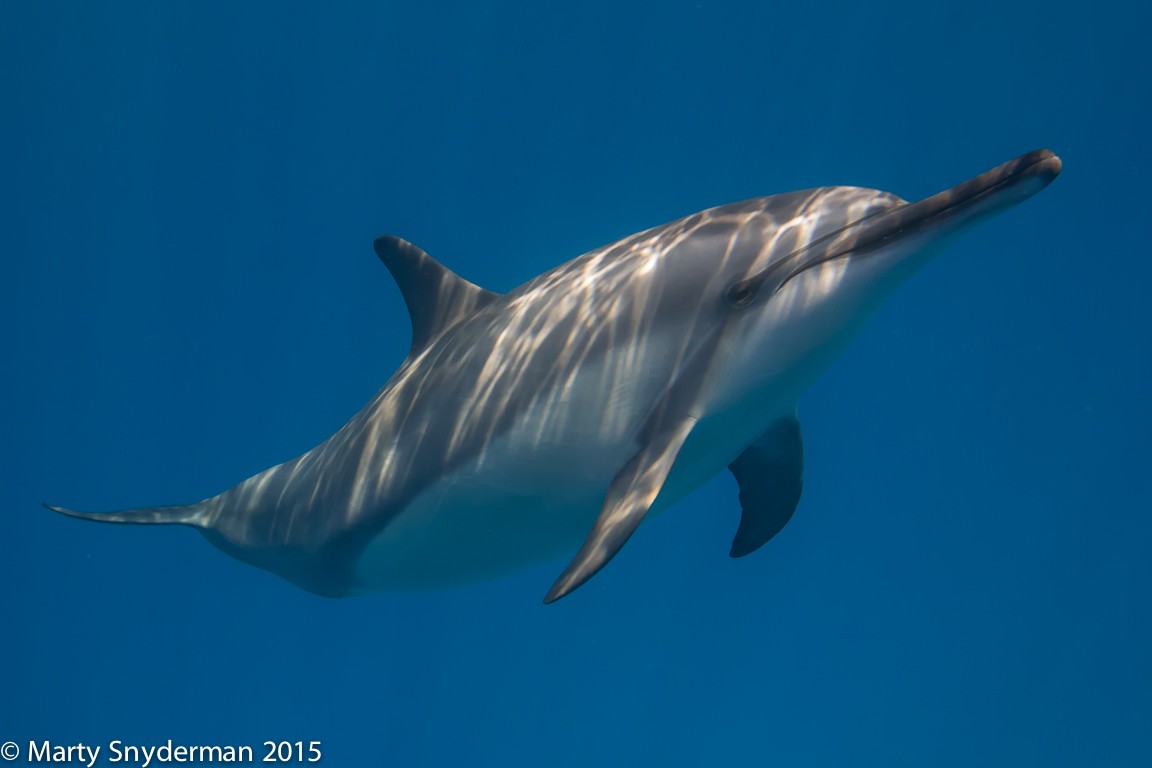 I think it fair to say that dolphins have a special place in the hearts and minds of a lot of divers. We admire their aquatic skills, obvious intelligence, and social nature. And we appreciate the fact that dolphins just have a way of lifting our spirits and bringing out the best in us whenever they appear.

Add a camera system to the feelings shared by so many, and there is no question that dolphins make highly prized photographic subjects. In the remainder of this piece I’d like to share a few thoughts and techniques that have helped me enjoy some photographic success when working with several dolphin species.

I have enjoyed much of whatever success I have experienced by choosing to swim with, not at, dolphins. Despite the fact that most dolphins are human-sized or larger, and they can easily swim circles around snorkelers and divers, like many wild animals, dolphins are often wary. This means they can be quick to flare and change course when feeling threatened, or perhaps merely uncertain.

So when I can, I try to swim in the same general direction as a dolphin or pod of dolphins that I want to photograph. I find that closing the gap gradually is often allowed if I can keep up with the dolphins long enough to do so. And sometimes being animated and active by spinning and moving up and down through the water column rather than being relatively still- and perhaps less interesting- sometimes gains their attention. When that happens, the dolphins often swim up to me to check me out. This technique doesn’t always work, but it works often enough that I try it a lot.

Because I want to be able to move as fast as possible, and because my subject is often as far as 10 feet away from me, I often make my dolphin dives without a strobe. Of course, this assumes the dolphins don’t just show up unexpectedly.

Get on the sunny side of the animal whenever possible. This suggestion comes into play in mornings and afternoons. And the odds are high that your image will please you more if you shoot with the sun coming from over your shoulder and directly lighting your subject as opposed to shooting back into the light.

I realize you can’t control where the dolphins go. But what you can do especially when you are diving around a relatively large pod is to look in the right general direction as you try to set up your shots.

Use a fast shutter speed. Dolphins can move at what feels like the speed of light when they make a sudden run toward you, a shooting angle that is often very pleasing. Given the fact that I usually want to “freeze the action”, I try to use a minimum shutter speed of 1/250th of a second, and one that is faster when I can.

I generally use my camera’s shutter priority shooting mode. That means I set the shutter speed and ISO, and my camera’s light metering system and “brain” selects the aperture. In the shutter priority mode the camera is continuously taking light meter readings so that you should get a good exposure, and that’s a pretty cool tool to have in your arsenal when photographing fast moving subjects that put themselves in ever changing lighting situations.

I set my light meter to “read and average” the whole scene. Some people, or manufacturers, refer to this style of taking a light meter reading as taking an evaluative, or matrix, meter reading because that is the language used by Canon and Nikon respectively.

Because the action happens fast and my camera-to-dolphin distance is somewhat unpredictable, I use my camera’s automatic focusing system. That said, I try to set the focusing option in my camera to allow me to focus on a dolphin’s head or face. Even when using a wide-angle lens which provides a comparatively deep depth-of-field, if I choose a focusing area that is too large my lens sometimes “grabs focus” on the animal’s mid-body or tail, and the leading edge of the snout is not in sharp focus. Bummer!

That said, many automatic focusing systems depend on their ability to detect contrast between the subject you want to focus on and its immediate surroundings. So if you try to focus on a single point, or even a rather small area, of the body of a general grayish dolphin, many cameras and lenses will not be able to accurately establish focus because of the lack of contrast in the area where you are trying to establish focus.

Whenever possible I try to photograph dolphins in shallow water on days with clear skies and plenty of sunlight. I love the look of frozen rays of light dancing across the backs of dolphins as they swim near the surface in clear water on sunny days. That is exactly what I did when creating the image of the spinner dolphin that illustrates this piece.

And last, but certainly not least, be sure you allow yourself to enjoy your encounter, and that means enjoying the process and experience of being in the water with dolphins instead of having all of your pleasure be dependent upon the final look of your processed image.

I hope the information provided here helps you enjoy some photographic success should you have the opportunity to photograph a wild dolphin. We hope to see you again in a couple of weeks. And if you did benefit from this blog, please tell a friend about it.

Marty Snyderman For the Vivid-Pix Gang

We hope that you’ve learned how to Take Better Pictures.