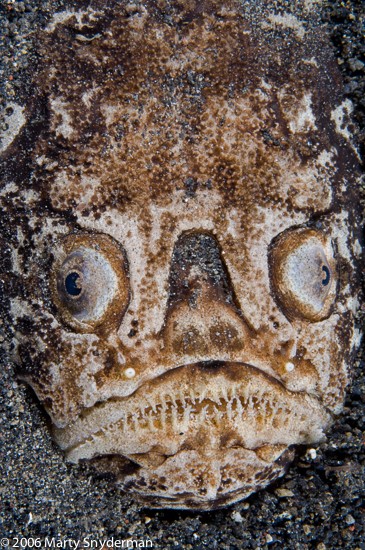 Muck diving. The term hardly sounds appealing, but in many popular diving destinations muck diving is the rage. As the name suggests, muck diving involves diving in areas where the sea floor is mud, clay or sand, preferably black sand in an area near where a freshwater river empties into the sea. Thus, muck diving habitats are considerably different than a kelp forest or coral reef where the vast majority of sport diving has been done for years.

Muck areas tend to lack relief and the cracks and crevices of reef communities. As a result the marine animals that inhabit muck areas tend to possess a different set of adaptations from those displayed by their reef dwelling cousins. Muck residents tend to blend in extremely well with their immediate surroundings or they are excellent burrowers. Many muck inhabitants lack the spectacular colors of creatures that inhabit nearby reefs. But because of their bizarre appearances and fascinating behaviors, good photographs of muck creatures are highly sought after by underwater photographers just the same.

The photographic subject in the image that is featured in this week’s blog is a whitemargin stargazer, an iconic muck resident no doubt. The eyes of stargazers are located high atop their head, and when the fishes are buried they appear to be looking upward toward the stars, thus the common name stargazer. The whitemargin stargazer is an ambush predator that often buries in the sand leaving only its bulbous mouth and cavernous mouth exposed as you can see in the accompanying photograph. And that look makes for a great photographic subject!

This photograph was created on a night muck dive in Indonesia’s Lembeh Strait. As you might suspect, the most challenging aspect of creating this image was finding the fish in the first place. Stargazers truly are masters of camouflage. Once located, a stargazer will usually remain still. But if you shine a bright light directly at a stargazer the fish will sometimes react by burying itself in the sand or by swimming away. Either of those behaviors can mean an opportunity lost.

After locating the stargazer my strategy was to turn my dive light to low power and make sure that my camera was set to what I believed would be the correct f/stop and focusing distance. To accomplish that I made my “best guess” regarding how close I would be able to get to the stargazer without frightening it. Then I pre-focused my lens on another object that was the same distance that I thought I would be from the stargazer when I moved in to create my image. So, I pre-focused to set my shooting distance, and I “locked the focus” at the pre-determined distance before moving in to compose my actual frame.

By pre-focusing and locking the focus at a set distance I was able to avoid having the lens “search” for the correct focus at the time I was actually trying to trip the shutter and take my shot. Once in position, I composed my photograph using the dim peripheral part of the beam from my dive light which was set to low power. By doing that, I felt like I was less likely to frighten the fish.

Some particles in the sand appeared to be highly reflective so I turned the power down on my strobes and closed down my aperture (used a larger f/number) to avoid over exposing those particles when shooting in the manual mode. If I had been using an automatic exposure function such as iTTL I would have set my camera system to under expose the shot by -0.3 f/stops. This would have helped prevent “blowing out”, or over exposing, any whitish, highly reflective particles in the sand.

To capture this shot, once I had my camera system set up as desired and I was ready to compose, I moved ever-so-slowly into position being especially careful not to kick up the “mucky” sea floor and ruin my opportunity. Then I composed and shot as I bracketed my exposures by changing my f/stop to be sure I acquired at least one frame that was both well-composed and properly exposed. Had I been using iTTl or any other “automatic” exposure system I would have bracketed my exposures by altering the EV (exposure value) over a series of frames.

We hope you enjoy and benefit from the information presented here, and we hope to see you back again in a couple of weeks. If you did benefit from this blog, please tell a friend about it.

Thank you,
Marty Snyderman For the Vivid-Pix Gang