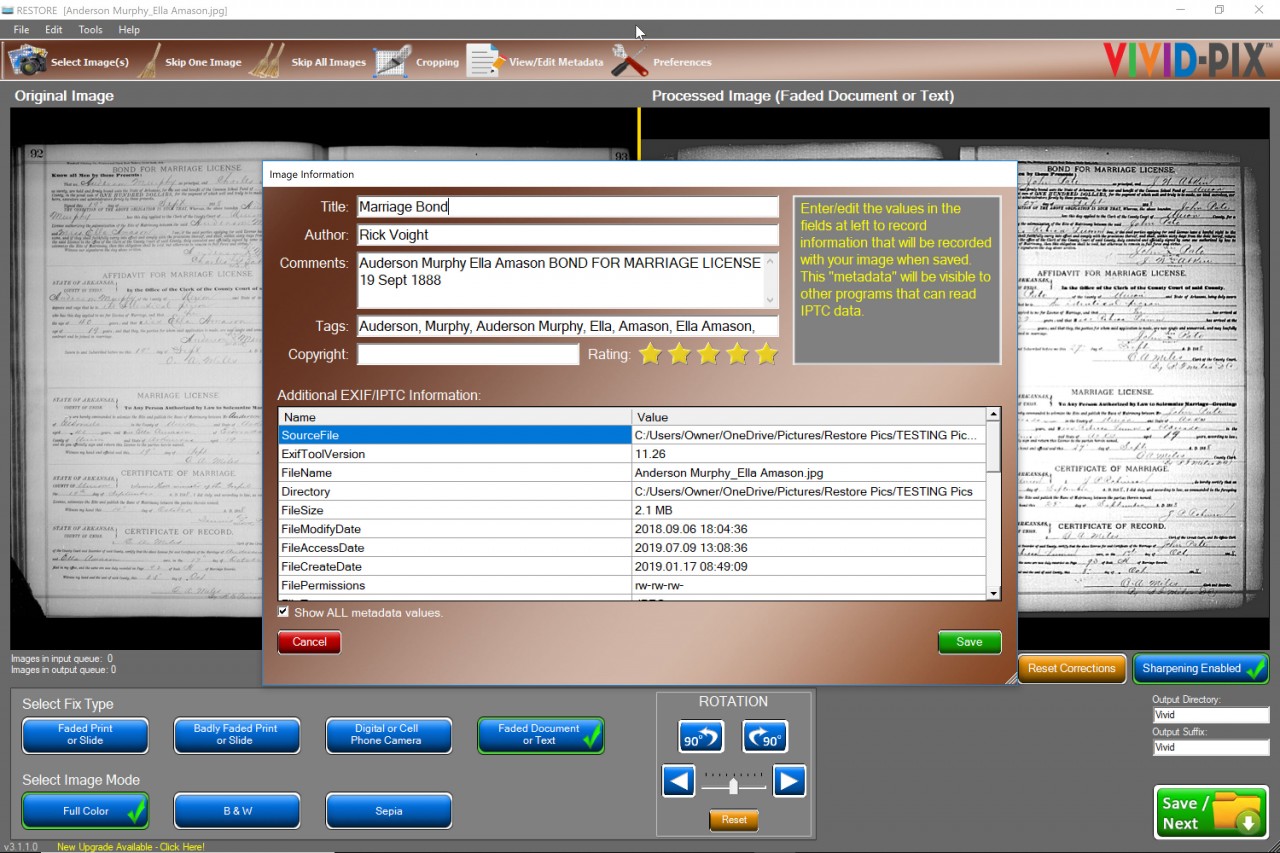 Alpharetta, Ga. and  Ft. Wayne, Ind. - Vivid-Pix, the inventor of easy-to-use image-improvement software, announced the latest Vivid-Pix RESTORE software enhancement - Zoom/Transcribe - will be launched July 9, at the Allen County Public Library, home to the largest genealogy center in a public library in America.

“Family historians, genealogists, archivists, and historians notate information about photos and documents in the metadata of images,” says Rick Voight, CEO, Vivid-Pix. “Up until now, this has been a tedious and difficult chore. With a couple of mouse-clicks, users can improve document legibility, zoom into the image to read important facts, notate these facts into the image metadata, tag key words for searching, and save this improved image quickly and easily.”

By listening to the needs of consumers and experts, Vivid-Pix continues to enhance their software – and provide free updates – to their acclaimed, patented software.  Consumer software (www.vivid-pix.com/restore) and Commercial software (https://vivid-pix.com/commercial-software) licenses are available at affordable prices. The ability to add metadata to images is available for MacOS and for Windows computers.  Zoom/Transcribe is currently available for Windows computers.

To see the software in action, visit Vivid-Pix’s Tutorial Video section at:  https://vivid-pix.com/learn-support/restore-tutorials.html

The Allen County Public Library has been part of the social and cultural fabric of Fort Wayne, Indiana and surrounding communities since 1895. It is proud to house and curate what is thought to be the second-largest family history collection in the United States. ACPL’s Genealogy Center attracts researchers from across the country and around the world.

In addition to fourteen library locations, ACPL also serves its community through various forms of outreach.  That outreach is delivered via ACPL’s community radio and television stations; delivery of programs and library materials to customers who are homebound or residing in senior facilities; and Audio Reading Service, which provides news and current event programing throughout Northeast Indiana and across the country.

Vivid-Pix (https://www.vivid-pix.com) designs, creates and delivers Fast, Easy and Affordable Imaging Software. Since launching in 2012, Vivid-Pix has advanced its product to earn the support and respect of business leaders and photographers in over 100 countries. Co-Founder Randy Fredlund has more than 150 digital-imaging patents and has extensive experience in Research, Development and Commercialization, enabling him to translate theory into practice.  Co-Founder Rick Voight has created billion-dollar businesses through Product Development, Sales and Marketing for Eastman Kodak and Hewlett-Packard. The Vivid-Pix Team is a far-flung group of excellent people who deliver software that “Give your pics (and documents) the Vivid-Pix Fix!”

Tweet
Metadata - Why it’s important and how you can use ...
Celebrate Independence Day with family photos